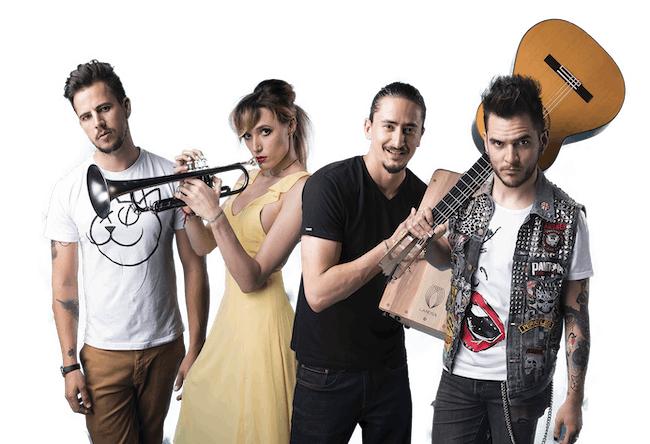 iCal
Google
Jenny and the Mexicats at The Chapel

A fusion of nationalities and personalities, the band's story is a little unusual and more of an accidental occurrence rather than a planned adventure. Jenny & The Mexicats began life as Pachucos y la Princesa in June 2008, when Jenny was invited to Spain by a Double Bass player (Icho) she'd met two years previously whilst touring in Madrid. In search of something new, Jenny fell right into place in Spain, decided she wanted to call it home and set about starting a band. Icho contacted the best guitar player he knew - Pantera, a flamenco guitarist, whom Icho had known all his life and shared previous bands with, including a a Rockabilly band in Spain. The closest thing to a drummer they could find was David, the Spanish Cajon player extraordinaire, whom Pantera had played with in a Flamenco band. Thrown together in the midst of an English girl's urge for adventure, Jenny & The Mexicats were born.

Their first gig was to be Wonderland, a small annual festival in the UK that raises money for cancer research, where Jenny had previously performed solo. .... Their musical roots had variety and spice and Jenny immediately fell in love with the combination of Flamenco, Acoustic Folk and Rockabilly and began writing constantly. They rehearsed nonstop for two months in the same Flamenco tablao they had met in, Jenny spoke no Spanish and David no English so it was left down to the universal love for creating music and some expert translating from the two Mexicans to bring it all together..... In England Jenny & The Mexicats created an immediate buzz and it was starting to look as though they may have stumbled across something special. They returned to Spain and continued in the same manner in which they had begun. They began booking more and more gigs and touring the whole of Spain.

After a brief spell signed to an English record label Jenny and the Mexicats decided that in order to protect their sound and to be able to grow in a more natural way, they wanted to be independant and so Mexicat Records was born. In 2012 they moved to Mexico city and released their first album 'JENNY AND THE MEXICATS' which included a mix of English and Spanish songs. Some classics from the bands earlier days like Heaven knows and Starting Something, and had 3 hits on the radio, Verde Mas Alla, ME Voy a Ir and Flor. For high numbers sales, this independant band went Gold with their first album and just recently released their second album 'Ome' en autumn 2014. Ome is a fantastic fusion of rhythms, that varies from feel good dance-able songs to moments of sensitive and timeless musical expression. The nature of the instruments and way of composing of Jenny and the Mexicats opens a lot of doors to switch between genres and be able play whatever they feel in that moment and makes for some very fun live shows.

In Ome, the first single is Labios, a song chosen for the soundtrack of Amor de Mis Amores, directed by Manolo Caro. In Frenetico Ritmo and Boulevard they recorded Tuba, and you begin to notice a Mexican influence. J&TM covered a Mexican classic called No Dejes de Quererme and mixed English and Spanish in this version, that was so popular that they have just been invited to sing it with La Sonora Santanera in their latest material. The voice of David shines in Duele a Caminar, Labios and Boulevard and an essence of Inglaterra can truely be heard in Head in My Heart and Back to Basics. The latter of which Jenny recorded alone with her guitar. There is a song dedicated to the bands dogs, 'Sasha y Esteban' and included is 'Even it Out', a classic earlier song from the band that many wished to hear in their first record but was not recorded till the second. 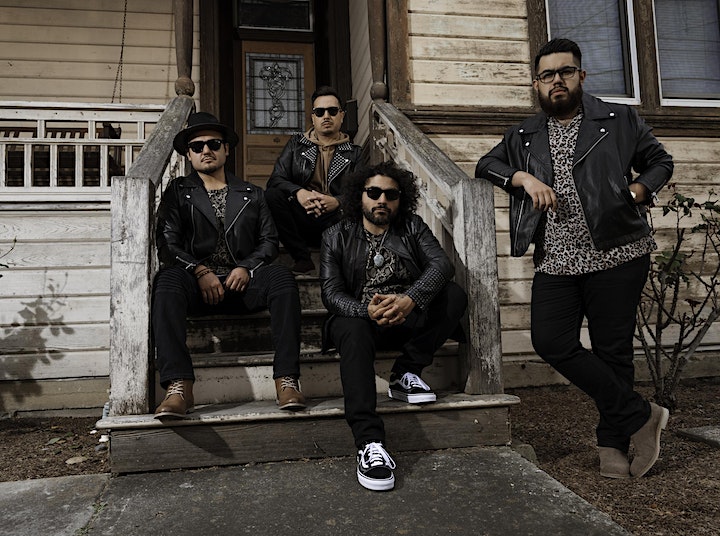 Hailing from a legendary musical family, it’s no surprise brothers Mexia, and Giovanni Hernández would have an affinity for music. Following in the footsteps of their father Hernán Hernández of Los Tigres del Norte, the Hernández brothers combined their musical talents to produce music with a message. Their first single "Todos Somos Arizona" garnered them national attention, as the song brought light to the racial injustices faced by immigrants in Arizona with the passing of the SB1070 law in 2010.

Soon after their viral hit, the Hernández brothers began performing in venues across their hometown of San Jose, CA, and this is where they met close friends, Matt Gonzales, and Eduardo Montelongo. With the help of Gonzales and Montelongo, the Hernandez brothers sought to create a new sound that demystified Latino music and united cultures. This is where Suenatron was born. Inspired by the Bay Area sounds of groups such as Santana, Tower of Power, War, Los Tigres del Norte, and Los Humildes, they began mixing the musical sounds they heard growing up with rap and electronic music. They dubbed this sound “Popteño” (a combination of Pop and Norteño).

Their sound is a direct result of their Mexican-American upbringing, in which households are accustomed to listening to an array of traditional Mexican music while simultaneously playing mainstream American music. Since the creation of their Popteño sound, Suenatron's sounds have only evolved by mixing more upbeat songs and rhythms. They dubbed this new sound, "Musica de Fusion" or Fusion Music, in listening to their unique sounds you should expect to hear a mix of pop, cumbia, norteño, rap, and some surprises.

As the sons of immigrant parents, Suenatron's mission is to create a genre of music that speaks to an often ignored audience, second-generation Americanos. By breaking away from the traditional by bringing in new flavors and sounds Suenatron expects to target a market demographic of Latinos and other viewers that understand the nuances of being brought up in dual cultures.

In their six years together, Suenatron has already made a name for themselves, their first single "Sincellamente" charted on the Billboard Hot 100 and their second single "Caramelo" dominated radio airwaves. They have toured all over the United States and Mexico, sharing the stage with a- list artist of many different genres.

Being able to play for different audiences, is a clear indicator that their sound transcends generations. Suenatron is a musical group creating a legacy all their own. In this years to come, this innovative group will be known for paving the way for new Latino sounds to emerge.