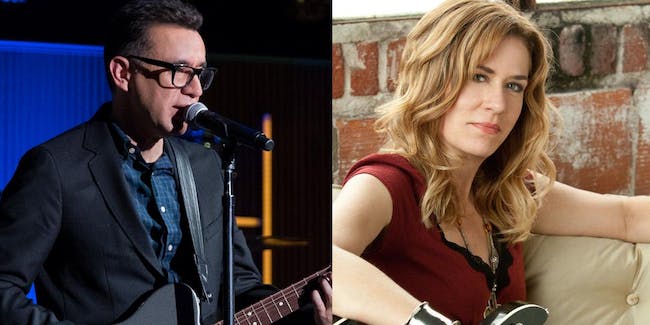 iCal
Google
Fred Armisen Residency: Comedy for Guitar Players but Everyone is Welcome: Night 3 with Vicki Peterson (The Bangles)

Fred Armisen presents a night of comedy and music with special guest Vicki Peterson (The Bangles).

For three nights, SF Sketchfest hosts Fred Armisen "in residence" at the Chapel with Comedy for Guitar Players but Everyone is Welcome, featuring a different special guest each night.

Vicki Peterson began writing songs in elementary school: "I was the kid who brought a guitar to every sleep-over in order to torture everyone with my newest creation …" She started a band with friends (and younger sister Debbi Peterson), playing power pop in high school. In 1981, Debbi and Vicki met Susanna Hoffs, and the three formed the iconic 80’s group The Bangles.

In the early 90’s, Vicki began writing songs with her good friend Susan Cowsill, the two performing as the Psycho Sisters. (In 2003, they became actual sisters when Vicki married John Cowsill, Susan’s brother and Vicki’s future Action Skulls band-mate.) In addition to performing their own material, The Psycho Sisters freelanced as celebrity back-up singers. Vicki herself provided harmonies to artists like Tom Petty, the Hoodoo Gurus, John Doe, and Belinda Carlisle. She also replaced a pregnant Charlotte Caffey as guitarist on the Go-Go’s 1994-95 reunion tour.

Vicki moved to New Orleans to be a part of the Continental Drifters, a critically acclaimed songwriters’ collective, which included old friends Peter Holsapple (dB’s) and Mark Walton (The Dream Syndicate).

The Bangles began recording and touring again in 2000. Two new albums from the band have emerged in the 21st century: 2003's Doll Revolution and Sweetheart of the Sun, released to glowing reviews in 2011.

The summer of 2014 saw the long-awaited release of Up On the Chair, Beatrice, the first—and almost mythical--full-length recording from the Psycho Sisters.

Vicki’s current musical projects include the Action Skulls, a combo formed spontaneously at a Christmas party. Skull members Bill Mumy, John Cowsill and Vicki get together whenever schedules allow; they released their debut LP (Angels Hear) in 2017, and are currently at work on an LP scheduled for release later this year.

Fred Armisen is one of the most diversely talented performers working today with credits that run the gamut from acting, producing, and writing in both comedy and music.

Armisen’s most recent venture is his new IFC comedy, Docuemtnary Now!. The show is a curated series of half-hour documentaries and biopics, each about a completely fictitious subject. The show is returning for its second season later this year. Meyers is an executive producer for the series along with Armisen and Hader, who play all of the primary roles. Additionally, Armisen recently teamed up with Lorne Michaels’ Broadway Video, NBCUniversal Telemundo, and fellow SNL alum Horatio Sanz to create a digital comedy channel aimed at the English-speaking Hispanic audience called Mas Mejor. The channel launched in early January and includes a weekly short-form premium comedy series and other topical video and editorial content.

This past February, Armisen starred alongside Ben Stiller, Owen Wilson, Penélope Cruz, Christine Taylor and Kristen Wiig in Zoolander 2, the sequel to the hit 2001 comedy Zoolander.

In February 2014, Armisen was named band leader of the 8G Band on Late Night With Seth Meyers. The band, curated by Armisen, includes members of indie rock bands Les Savy Fav and Girls against Boys.

An eleven season veteran of Saturday Night Live, Armisen has engaged audiences with memorable impressions and characters including world leaders like President Barack Obama or Iranian President Mahmoud Ahmadinejad in the popular digital short “Iran So Far Away” to “Weekend Update” fixtures like political comedian Nicholas Fehn or half of the songwriting team of Garth and Kat (with Kristen Wiig) to name a few. He closed out his last season in the guise of British punk rocker Ian Rubbish with a star-studded performance of the original song “It’s a Lovely Day.”

He has appeared in countless feature films including 7 Days In Hell, Addicted To Fresno, Easy A, The Rocker, Confessions of a Shopaholic, Eurotrip, and The Promotion as well as lending his voice to the feature The Smurfs. He has also appeared in the films Tenacious D in the Pick of Destiny with Jack Black, Baby Mama with Tina Fey and Amy Poehler, The Ex with Zach Braff and Jason Bateman, and in Will Ferrell and Adam McKay’s Anchorman: The Legend of Ron Burgundy.

On the small screen, he has made guest appearances on New Girl, Unbreakable Kimmy Schmidt, Man Seeking Woman, The Awesomes, Modern Family, Difficult People, Brooklyn Nine-Nine, 30 Rock, House of Lies, Super Fun Night, Broad City, and Parks and Recreation, and the cable comedy shows The Sarah Silverman Show, Human Giant, and Tim and Eric Awesome Show, Great Job!. He was also seen in the smash kids show Yo Gabba Gabba on Nickelodeon and did voice over guest spots on Archer and Chozen.

His career began as a musician in the Chicago-based post-punk band Trenchmouth as well as playing with the Blue Man Group. His transition to comedy came with the 1998 underground short film Fred Armisen’s Guide to Music and SXSW which followed him through the Austin, Texas “South by Southwest Music Festival” posing as a music journalist. In 2006, he interviewed Cat Power for the influential music website Pitchfork.com and later combined his love for music and comedy by creating the role of drummer Jens Hannemann and releasing an instructional DVD, Complicated Drumming Technique, in 2007. Armisen has landed on Rolling Stone’s “Hot List” and has also been included several times on Entertainment Weekly‘s “Must List” in regards to his many projects.

Vicki Peterson
Born: 11 January 1958 in Northridge, Los Angeles, California. Vicki Peterson is an American musician and guitarist. In 1981, she founded The Bangs, later renamed The Bangles, with her younger sister Debbi Peterson, and Susanna Hoffs. After The Bangles disbanded in 1989, Peterson joined the Continental Drifters and The Psycho Sisters, in both cases alongside Susan Cowsill. In addition to performing their own material, The Psycho Sisters freelanced as celebrity backing singers (Steve Wynn's 'Fluorescent' and Giant Sand's 'Center of the Universe'). Peterson has also contributed harmony vocals to recordings by the Hoodoo Gurus, John Doe, Tom Petty and Belinda Carlisle. Additionally, she replaced a pregnant Charlotte Caffey on the 1994–95 Go-Go's reunion tour.
Venue Information:
The Chapel
777 Valencia St
San Francisco, CA, 94110