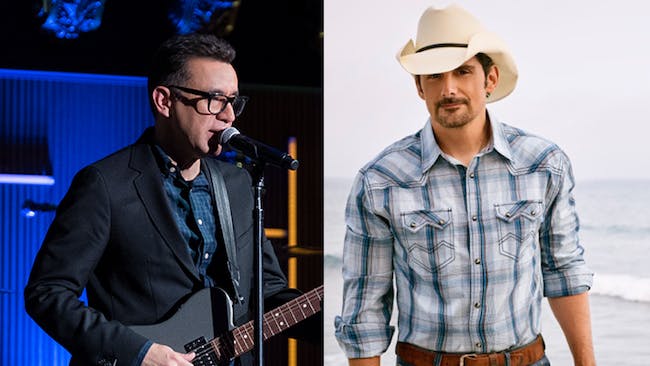 Fred Armisen presents a night of comedy and music with his friend Brad Paisley.

For three nights, SF Sketchfest hosts Fred Armisen "in residence" at the Chapel with Comedy for Guitar Players but Everyone is Welcome, featuring a different special guest each night.

Brad Paisley is a critically acclaimed singer, songwriter, guitarist and entertainer whose talents have earned him numerous awards, including three GRAMMYs, two American Music Awards, 15 Academy of Country Music Awards and 14 Country Music Association Awards (including Entertainer of the Year), among many others. He has been a proud member of the Grand Ole Opry since 2001. Paisley has written 21 of his 24 #1 hits and has accumulated over 20 million career total worldwide album sales, track downloads and streaming equivalents. Paisley’s 2019 World Tour just completed with eight sold-out shows in Europe and he now holds the record for a headlining country artist in all of the European venues played on this tour. Paisley is involved with a successful ongoing multi-year ad campaign with NationwideÒ Insurance, along with Peyton Manning. Paisley and his wife, Kimberly Williams-Paisley, are co-founders of a nonprofit organization called The Store,a free-referral based grocery store, which aims to empower low income individuals and families in the Nashville area. Go to www.thestore.org for more information. Paisley has partnered with Boot Barn® and developed an exclusive line of jeans, hats, T-shirts, jewelry, belts and woven shirts called Moonshine Spirit by Brad Paisley. Connect with Brad at www.BradPaisley.com, www.Facebook.com/BradPaisley, on Twitter@BradPaisley, on Instagram @Brad Paisley, and YouTube at YouTube.com/BradPaisley.

Fred Armisen is one of the most diversely talented performers working today with credits that run the gamut from acting, producing, and writing in both comedy and music.

Armisen’s most recent venture is his new IFC comedy, Docuemtnary Now!. The show is a curated series of half-hour documentaries and biopics, each about a completely fictitious subject. The show is returning for its second season later this year. Meyers is an executive producer for the series along with Armisen and Hader, who play all of the primary roles. Additionally, Armisen recently teamed up with Lorne Michaels’ Broadway Video, NBCUniversal Telemundo, and fellow SNL alum Horatio Sanz to create a digital comedy channel aimed at the English-speaking Hispanic audience called Mas Mejor. The channel launched in early January and includes a weekly short-form premium comedy series and other topical video and editorial content.

This past February, Armisen starred alongside Ben Stiller, Owen Wilson, Penélope Cruz, Christine Taylor and Kristen Wiig in Zoolander 2, the sequel to the hit 2001 comedy Zoolander.

In February 2014, Armisen was named band leader of the 8G Band on Late Night With Seth Meyers. The band, curated by Armisen, includes members of indie rock bands Les Savy Fav and Girls against Boys.

An eleven season veteran of Saturday Night Live, Armisen has engaged audiences with memorable impressions and characters including world leaders like President Barack Obama or Iranian President Mahmoud Ahmadinejad in the popular digital short “Iran So Far Away” to “Weekend Update” fixtures like political comedian Nicholas Fehn or half of the songwriting team of Garth and Kat (with Kristen Wiig) to name a few. He closed out his last season in the guise of British punk rocker Ian Rubbish with a star-studded performance of the original song “It’s a Lovely Day.”

He has appeared in countless feature films including 7 Days In Hell, Addicted To Fresno, Easy A, The Rocker, Confessions of a Shopaholic, Eurotrip, and The Promotion as well as lending his voice to the feature The Smurfs. He has also appeared in the films Tenacious D in the Pick of Destiny with Jack Black, Baby Mama with Tina Fey and Amy Poehler, The Ex with Zach Braff and Jason Bateman, and in Will Ferrell and Adam McKay’s Anchorman: The Legend of Ron Burgundy.

On the small screen, he has made guest appearances on New Girl, Unbreakable Kimmy Schmidt, Man Seeking Woman, The Awesomes, Modern Family, Difficult People, Brooklyn Nine-Nine, 30 Rock, House of Lies, Super Fun Night, Broad City, and Parks and Recreation, and the cable comedy shows The Sarah Silverman Show, Human Giant, and Tim and Eric Awesome Show, Great Job!. He was also seen in the smash kids show Yo Gabba Gabba on Nickelodeon and did voice over guest spots on Archer and Chozen.

His career began as a musician in the Chicago-based post-punk band Trenchmouth as well as playing with the Blue Man Group. His transition to comedy came with the 1998 underground short film Fred Armisen’s Guide to Music and SXSW which followed him through the Austin, Texas “South by Southwest Music Festival” posing as a music journalist. In 2006, he interviewed Cat Power for the influential music website Pitchfork.com and later combined his love for music and comedy by creating the role of drummer Jens Hannemann and releasing an instructional DVD, Complicated Drumming Technique, in 2007. Armisen has landed on Rolling Stone’s “Hot List” and has also been included several times on Entertainment Weekly‘s “Must List” in regards to his many projects.