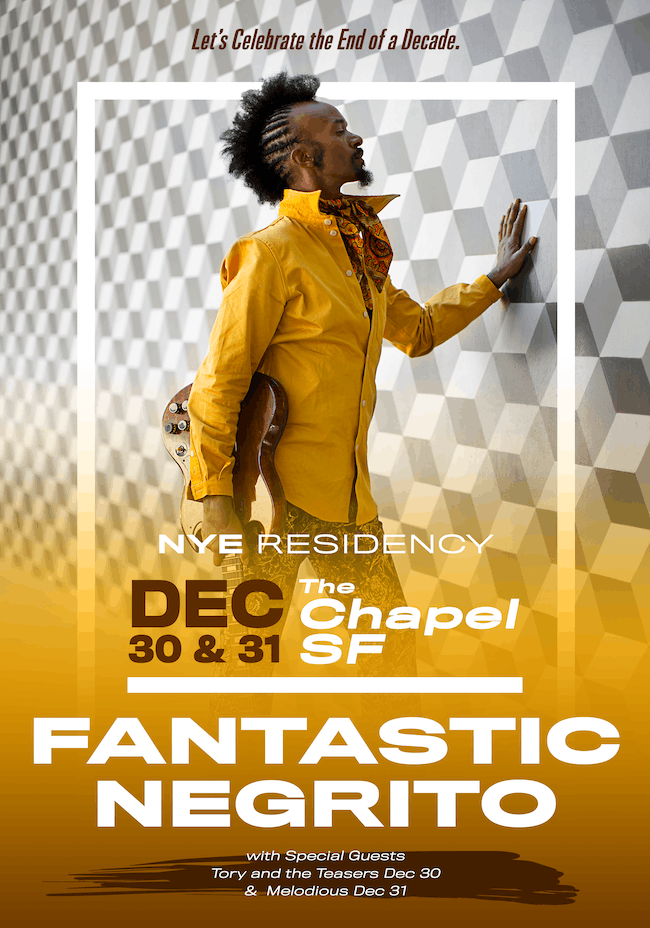 Tory and The Teasers

Fantastic Negrito is the incarnation of a musician who is reborn after going through a lot of awful shit. In fact, the name Fantastic Negrito represents his third rebirth, literally coming back from death this time. The narrative on this man is as important as the sound, because the narrative is the sound. Songs born from a long hard life channeled through black roots music. Slide guitar, drums, piano. Urgent, desperate, edgy. Fantastic Negrito is the story of a man who struggled to “make it”, who “got it”, who lost it all, and somehow managed to find his way back. These are singular songs by a true musician who writes and produces his own work. His songs are his fuel as he continues on the third comeback of his life, at a time when our world is in upheaval.

The first life (‘who am I and where am I going?’). Fantastic Negrito was raised in an orthodox Muslim household. His father was a Somali-Caribbean immigrant who mostly played traditional African music. When, at the age of 12, Negrito’s family moved from Massachusetts to Oakland, he was hit with an intense culture shock. Oakland in 1980s was a million miles from Negrito’s conservative childhood. He went from Arab chants to Funkadelic in one day, living in the heart of one of the wildest, most infamous, most vibrant black communities in the nation. Shit was extra real in Oakland.

By the time he was 20, Negrito had taught himself to play every instrument he could get his hands on. He was recording music, but he was also caught up in street shit. This went on for several years until a near death encounter with masked gunmen. After that, Negrito packed his bags and headed to LA, armed with a demo on cassette.

The second life (‘I want to be a star…I think’). It didn’t take long for Negrito to find himself entrenched in the ‘Hollywood’ lifestyle; “clubs and bitches and bullshit politics that have nothing to do with great music.” Negrito signed with a big-time manager and soon after that, a million dollar deal at Interscope …and soon after that, creative death.

The record deal was a disaster. Gangsta rap ruled the airwaves and Negrito was in the wrong place at the wrong era. Negrito came out of the deal with a failed album and his confidence gutted. He was infected by the constant emphasis on ‘what would sell’; which looks, hooks and gimmicks would attract an audience. He lost all sense of himself. The songs stopped coming to him, so he quit. He sold all of his shit and he quit.

In 2000, Negrito was in a near fatal car accident that left him in a coma. For four weeks it was touch and go. His muscles atrophied while bedridden and he had to go through months of grueling physical therapy to regain use of his legs. Rods were placed throughout his body. And worst of all, his playing hand was mutilated. Though he rehabbed intensely for several years, the damage was permanent. In 2008, he returned home to Oakland.

The third life (the birth and rise of Negrito). Back in Oakland, Negrito forgot about life as a musician. He settled down, planted vegetables, raised his own chickens, and made money growing weed. He also settled into being a man, on his own, clear of the distractions of wanting to be a star. This is when his specific POV of the world came into focus. His conservative Muslim values melded with the liberal, multi-cultural world of Oakland. The cynicism that comes from struggle made room for the hope that comes from cheating death. He truly knew who he was. He was confident about his place in the world because he understood it as much as any man can. And then his son was born.

With his son’s entrance into the world, all the creative energy Negrito bottled up came rushing out. His musical choices were sharp and without doubt. He began recording without the hindrances that come with chasing trends. “Fuck what’s hot now, what moves me?” Negrito turned to the original DNA of all American music, the Blues. The beating he took in life had given him primed him to channel his literal and musical forefathers: the Blues musicians of the Delta.

Operating with a sense of destiny, and no longer constrained by other voices, Negrito returned to the streets of Oakland to test his songs. He went “to the places no one wanted to hear them,” street corners and BART stations during rush hour. He knew if he could reach people, if he could get them to stop, listen, and connect, he was on to something. It was there, on the streets he shaped his sound and his message.

In less than a year Negrito would go on to win the inaugural NPR Tiny Desk contest. The following year he released his debut full-length album The Last Days of Oakland, which was immediately met with critical acclaim. NPR called it “among the rawest pieces of music — sonically and emotionally — you’ll hear all year.” The album went on to win the Grammy for Best Contemporary Blues Album in 2017.

Negrito’s music also caught the attention of Chris Cornell, who invited Negrito to tour with him, first in Europe, then North America, and finally with Cornell’s legendary supergroup Temple of the Dog. The unconventional pairing won over fans and critics everywhere. From there Negrito went on to play major festivals tour extensively throughout Europe and North America.

But none of this has been about awards or acclaim or validation. Negrito chased those before — and it nearly killed him. Now, as he looks around, sees the world going on a similar journey…especially America. This is a man who knows what it looks like to drive off a cliff.

“As a society we are so divided, we are so entrenched in our ideology, we won’t budge for common sense,” says Negrito. “We worship celebrities and billionaires, while people work harder than they ever worked, and make less money. Our children are being gunned down in school shootings and we seem numb to it! We’ve got militarized police shooting first instead of protecting and serving. Nazis in the streets. Families torn apart by deportation. A tiny 1% getting richer while people sleep underneath freeways and overpasses in my hometown of Oakland, CA. Home ownership and education seem out of reach. This is not the American Dream.”

America has lost its way, and now we are paying the price. Fantastic Negrito’s new album, Please Don’t Be Dead, is about what comes next.

When you listen to Negrito, you’re invited to hear the story of life after destruction. For anyone who ever felt like it was over yet hoped it wasn’t, this is your music. 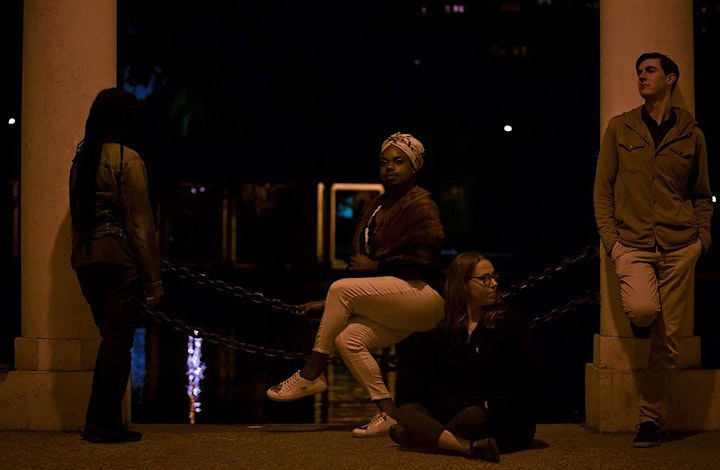 Tory and The Teasers is an Oakland, CA based band. Bringing the funk, soul and dance party to stages all over California!